Outsourcing and its role on the economy – Good bad or indifferent?

Massachusetts governor, Mitt Romney, claims to be in agreement with President Obama when it comes to offshore jobs and their negative effects on the economy. According to his “Believe in America” economic plan, he would like to adopt a “territorial tax system” were income earned would only be taxed in the country the money was earned. Romney says his plan would encourage companies to create jobs at home, and eliminate outsourcing.

Why Some Experts Say Outsourcing is Good 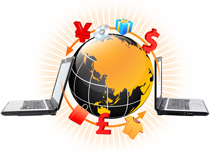 We hear a lot about how bad outsourcing is but numerous expert economists claim that the practice of outsourcing is actually beneficial to workers. Companies are able to outsource the manual jobs, the ‘grunt work,’ leaving their companies to focus on the research and development of their products. Economic growth is tied to innovation, and economists claim that outsourcing allows companies to remain competitive, and thus in business, which has a positive effect on the economy. It drives down the price of goods and services, especially in items like toys, electronics, and clothing. It drives the economy, which in turn creates other jobs.

Why Some Experts Say Outsourcing is Bad

On the other side of the coin are the experts that say that the loss of American jobs to outsourcing has had a negative effect on the economy.  The exact number of American jobs lost to outsourcing overseas is not known, because companies are not required to provide such information. The Wall Street Journal did their own analysis and the numbers they have come up with, indicate that more than 2.4 million jobs have been outsourced from 2000 to 2010.

Why Some Experts Say Outsourcing is Neutral

Job loss can have a devastating effect on those it affects. We have seen job losses increasing with the financial crisis in the United States, and more companies outsource. However, those that advocate for outsourcing are quick to emphasize that erecting trade barriers will not solve the problem, claiming that the need is to protect people not jobs. This same group of experts believes that outsourcing has no effect good or bad on the economy, because for every job lost another is created in the American economy because companies remain competitive and grow, and new companies come to the market from that growth.

What is the Right Answer?

That’s a good question, and it depends on who you are talking with. The government is creating bills that will help to discourage companies from going offshore for their labor force in a number of ways, including clamping down on tax deferral for income from abroad plants and factories.

The retraining of workers is necessary to fill the voids in the local job economy. Many experts believe that it is not that there are not jobs available, but rather that the labor force is not trained for the types of jobs that are available.

Outsourcing brings about a lot of political posturing about outsourcing. Even with all the posturing and grandstanding, the bottom line is that President Obama has really not acted on his plans to changes the rules relating to outsourcing. As a result it is likely outsourcing will continue and it will be business as usual.