When Barack Obama presided over Republic Day ceremonies in India on January 26, 2015, he became the first American President to be designated as “Chief Guest.” Since President Obama’s India visit represented the first time that a sitting American President has visited India twice, the event was treated with some added attention.

Media coverage tended to focus on a variety of diplomatic, scientific and political repercussions of President Obama’s visit to India. In contrast, this post from BackOfficePro will focus on the increased hopes for joint business opportunities between the United States and India.

What President Obama’s Visit to India Means for Businesses 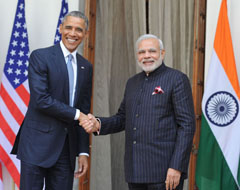 During the historic visit, Prime Minister Modi and President Obama both pledged to take businesses to the next level. President Obama spoke of American concerns that need to be addressed — for example, improvement of the business policy environment to better protect intellectual property rights and removal of business barriers. Prime Minister Modi promised moves to cut red tape and move forward. Doing business in India is going to get easier for US companies and vice-versa, which is clear from the joint statements issued by Modi and Obama. They concluded the visit with a far-reaching agreement that is projected to result in $4 billion of new business transactions between the two partners — with thousands of new jobs in both the countries.

India’s Prime Minister Modi vowed to change the current reputation of India as a tough place for foreign companies to do business — “We will guide you and walk with you in your projects.” Here are several other excerpts from Prime Minister Modi’s comments:

Outsourcing has traditionally meant “IT outsourcing” in India in which it remains the world leader. By opening doors in India for US companies in sectors like manufacturing (as part of the Indian government’s new “Make in India” policy initiative), one can witness the rise of a new pasture in outsourcing — “Manufacturing Outsourcing,” that will create new jobs in India as well as more profits for US firms, thus bringing about a balance on outsourcing with insourcing.

President Obama noted the combination of substance and symbolism reflected in his visit — he emphasized that the two countries are “inextricably linked” in today’s interconnected world. Here are some additional remarks he made during his India visit:

If India becomes a manufacturing hub with increased assurance for intellectual property rights for US companies, as Prime Minister Modi has promised, then that is likely to bring more US manufacturing projects from China to India.

One of the principal foreign policy initiatives during the Obama administration is known as “Pivot to Asia” — designed to rebalance American trade interests from the Middle East and Europe to Asia. While some observers have expressed concerns about the practical business substance of the Asian Pivot, President Obama’s successful visit has restored confidence in the future of a policy that promises more business partnerships between the United States and India.

What do you think is ahead for American and Indian trade and investment relations? Please share your candid comments below and share your thoughts via social media with the share buttons.

Back Office Pro is proud to be a long-term partner in the profitable international business opportunities that are possible with cost-effective outsourcing.